Forget The Tipping Point, Let's Talk about The Breaking Point

My left eye began to twitch.  Or was it my whole face?  I was twitching and blinking and wondering if it's possible to develop Tourette's out of the blue. One of my sons had bouts with it, so maybe this was some latent form of the disorder passed up from child to mother.  Or, maybe not, as just then the volume of my voice began to rise.  Incredibly it went from zero to eighty in less than two seconds...decibels, that is. The recipient of my twitching, blinking, shrieking rage? Yasir A, Badge # 234372 of Standard Parking Company, with the memorable tagline "ambience in parking". What do you think that means?? Yasir had come on over to the toll booth at DIA to play 2 on 1.  Yasir + Markos the non-English speaking cashier at Denver Airport's parking garage = 2 against me, 1.
Despite, or rather, due to his lack of English, Markos had a hard time understanding my explanation of why I didn't have my parking receipt.  Mind you, I had just spent 20 minutes in line at the main parking office inside the terminal to ensure that this lack of parking receipt would not be an issue.  And that is what I had been assured. ("We have cameras that photograph your license plate when you enter so we know exactly how long you have been there and so there is never a charge for a lost parking receipt") So when Markos tried to charge me $54 for 45 hours of parking (which, by the way, has a MAXIMUM rate of $36), I said no.  Not only was I beginning to become irate since I had just jumped through all of the hoops to avoid this exact issue, I was also becoming irate because it was so clinically, cynically, salt-to-the-wounds dispassionately cold and inhuman to try to fleece someone who's just been fleeced!
Whatever happened to interactions between humans that are based on shared human experiences. Why was it that, despite being the victim of a crime, I had yet to be offered one ounce of compassion, understanding, or assistance? (correction, the gals at  the United counter, who helped my husband find a way to leave an envelope with $40 for me-so I could pay my $36 parking fee, were lovely, helpful and appropriately empathetic. They had not turned him away and said "that's not allowed", even though it wasn't allowed.  They had used their noggins and their hearts and had also, appropriately nodded with approval at his foresight and devotion.)
I just read up on Standard Parking's website and have decided that Yasir and Markos must have played hookey on training day.  The website clearly states: Standard Parking's reputation for outstanding on-site management is built on a comprehensive, award-winning training system.  The process identifies and develops the skills and attitudes required to enable all of our employees to perform up to our stringent expectations.
With my alarm set for 5:10 (the airline folk advised me to get to La Guardia as soon as it opened), I curled up briefly only to hop up again to close the AmEx account. After a few minutes more passed, I realized my credit report would need a fraud alert.  Half an hour later, my heart sank as I realized that the piece of paper I carry with all the kids' social security numbers was in the wallet too.  Not to mention the parking receipt from DIA. Damn. 5:10 arrived about a minute after I had finally fallen asleep.  Time to stumble from the bed, to the shower, to the lobby, for the 5:30 shuttle; which today had left at 5:29.  Deep breaths.  It was just a ten minute walk...sure it was on the edge of several highways in Queens, NY... plus the sun wasn't up, but figuring there wasn't much left to steal, I hoofed it over to the terminal. 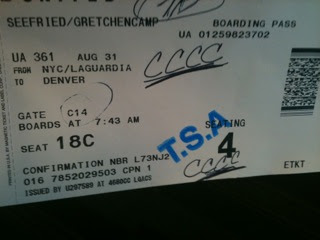 Turns out that although I had flown out on Frontier, my flight back was on United.  The guys behind the ticket counter chuckled at my assortment of identifying papers, pronounced them overkill, and good-naturedley scooted me along to security. There, it was a different story.  Ms. Brown, 'Lead Officer' was summoned by Ms. Devila. (I think they got the name tags mixed up, as Brown was clearly the Cruella of the two.)  She took a cursory glance at my reams of papers, briefly peered at my face, and declared " Well, I can't tell that's you".  She was enjoying that view from high up on the seat of power, and wasn't going to give up this golden opportunity to make me quake too quickly.  When I offered to show her my photograph with name caption on the WomensRadio website, she scoffed and said "I'm not holding up all these people for that." I was the only person in her "special treatment" line.  At last she scribbled CCCC twice on my ticket, pressing down hard as a third grader as she furiously underlined the mysterious letters, and then grudgingly allowed that I could go to the "frisking and bag toss" station for another twenty minutes of inane search.
This story has gone forwards and backwards, kind of like my last 24 hours.  But the final kicker is only sentences away so hang in there.  The text that I received this morning from my duly knighted spouse was to tell me about the $ in the United Service Director's office,  and also relayed that he had (mistakenly) left his Visa at the FedEx/Kinkos last night, and that they were holding it for me.  So this afternoon, I left early to pick up our daughter from rehearsal, headed to Cherry Creek North, fed the stupid parking kiosk, obediently went back to my car to put the slip in the dash, then headed up the steps to Kinkos.  I pulled out all of the copies he had made last night, explained the whole thing all over again to the gal behind the counter, fully expecting that since I was back in the'hood, all would be good.  But 'lo and behold, the tenets of sound reason  have been replaced by those of senseless rule. Even after pulling up the actual text on my phone that described the situation, our Visa card remains tucked away in the drawer  of Kinkos, while Phil is in California until Friday, my ATM card and credit card accounts are all closed, and I'm wondering why the hell the world is upside down.
This is the longest post that I have ever written, but why stop now!
My dear friend, Laura, long ago introduced our family to the spectacularly comprehensive phrase "stop the nonsense!" which is not only contagious but also covered all kinds of situations arising among our (combined) 10 children.  But, as of today, I am hijacking the term for use in circumstances like those described above.
America, stop the nonsense!  Stop being drones. Stop being dehumanized. Stop being dictators in the name of democracy.
Start using your heads.  Start using your hearts.  Start being human.
Frankly, I'd rather die humane, than live inane.  This is not the end of this topic, just the end of my evening.  Stay tuned, there is more to come!
Posted by Gretchen Seefried at 10:34 PM