Whatever you do, don’t have your wallet stolen.  Especially in New York City.  Especially 11 hours before an early morning flight.  Especially if the policemen who were nice enough to give you an unauthorized ride back to the airport hotel, neglect to make a police report which, by the way is required, in order for the airline to believe you are not a middle-aged American jihadist intent on blowing up the plane just so you won’t have to pay the next installment on 3 college tuitions. For my own take on installments, the next post in this series on travel is also now available here.

Yessiree, it was a memorable day...(and night, but I promised to put that in the next installment). Started out drinking creamless coffee out of a do-we-still-not-care-that-Styrofoam-is-toxic cup at the airport hotel, and attempted to accomplish an hour or two of actual work, yet succeeded only in thinking a whole bunch of brilliant, but undocumented thoughts.  On a more positive note, spent an hour and a half catching up with longtime friend, Ashley, who I hadn’t seen in years.  Next stop was Aldo’s for a pair of sale shoes as I took pity on my  feet. Did you know that the sidewalks that run between Fifth Avenue and Central Park are still made of cobblestones?  Really! 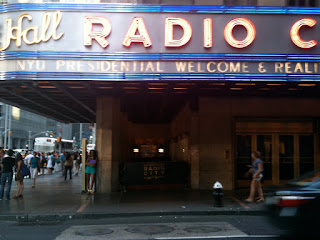 The high point of the day was Radio City Music Hall where my son,  and 17 other knock-your-socks-off talented New York University kids performed The NYU Reality Show for a crowd of 7,000 incoming students.  Wow...that's all I can say - wow!  From the cheer team dancers to the school band, and the bagpipers leading the Dean's procession to the keynote speaker, award-winning actress  and passionate NYU alum, Kristen Johnston, from the warm welcome given by University President, John Sexton, to the Reality Show: NYU -- a gritty, funny musical about the lives of NYU students as they experience an array of confounding, confusing, and exciting issues, every minute of it was spectacular- so yes, again wow. 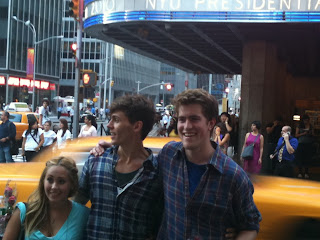 For a school that few would associate with  the rah-rah culture of  the typical college experience, this was a unique and unanimous expression of both welcome and unity to the newly arrived.  Addressing issues ranging from anorexia to test anxiety, drinking to street smarts, roommate woes to homesickness, relationship violence to safe social media use, suicide to sexual orientation, this was a rare and remarkable performance. Written and performed by a dozen and a half current students, it left no stone unturned, no secrets untold, and no doubts unassuaged.  The phone number of the NYU Wellness Exchange was repeated and recited and reverberated hundreds of times...no one could have left that hallowed venue with out the hotline permanently burned in his or her memory.  I wonder how different the college years (and the future's they shape) would be if all schools welcomed their incoming students with such a clear message of universal acceptance and 24/7 access to meaningful support.


And then I giggled a little recalling the call we received from Will about a week into his freshman year, after he'd gone to the local NYC emergency room for a "bad cold".  I had stared at the lengthy Wellness Center printout tacked to my bulletin board in Denver while gently suggesting that the school must have an infirmary of some sort.  He vehemently denied the possibility, and when that thousand dollar bill arrived, I just swallowed hard as I submitted it to the insurance company flavor of the month.  Last night I asked him if they had had The Reality Show when he began NYU...and when he confirmed that they had, I asked why he hadn't known about the Student Health Center and Wellness Exchange then. He sheepishly grinned and replied "I guess that show just wasn't as good as ours..." 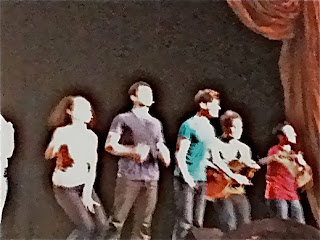 Posted by Gretchen Seefried at 10:15 PM