I Had Nightmares About the Plunger

Everyone needs a Kristen on their team.  My daughter has that kind of attitude that you wish could be packaged and shared with any victim of any thing.  Maybe it's the classic entitlement that is often attributed to being the oldest, or maybe it's the Mimi gene she got from my Irish-tempered grandmother; but whatever it is, I wish I had it! Kris thinks nothing of calling up Apple, At & T, or Wells Fargo and reading them the riot act if something is amiss with her settings, service, or statement. And she can hold a grudge like nobody's business!  After the dean of students at her boarding school had the audacity to suggest that she may have a hard time in college, she mails him her honor roll status every semester. Once, she included some wax for his unibrow.

After she moved out of the dorms and into a tiny house for her senior year, the dorm staff danced a jig, while her landlord is now trembling in his boots.  Within 3 weeks of her arrival she had bullied him into repaving the driveway, renovating the bathroom, installing a new oven, replacing the kitchen floor, and putting in all new gutters! 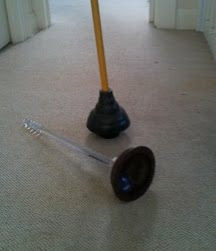 Now mind you, she's a lowly college student paying a pittance to share this crummy little place for a year with 2 other girls.  But never mind that, she has standards.  And this place was not meeting them. The contractors (finally) showed up yesterday (a day late) and began to do what contractors do.  Too bad I didn't record the call last night when she arrived home to find the driveway unsealed, the fridge in the living room, her washer and dryer on the back porch (clothes too, of course), white dust everywhere, and the crowning blow: plungers left on her bedroom rug.

Now Kris, despite less than a year away from becoming a nurse, is an incredible germ phobe.  She won't go barefoot anywhere, and blanches if I put my purse on the kitchen counter or a suitcase on the bed ..."who knows what floors they have seen??"

So finding plungers on her new Ikea rug was her version of biological warfare.  "Oh my God, oh my God, oh my God" was all I could here on my end of the phone as I imagined some intruder jumping out of the closet.

These are the texts I received this morning after inquiring how the rest of the evening went.

"Slept at kelsey's, doing a mid day surprise check to see what is going on.   Lazy men.  With plungers.  I had nightmares about the plungers."


"and my laundry.  on the porch.  this is not west virginia."


Now I have heard Kris take someone to task many times before, but usually it is over the phone.  Damn, can't believe I'm going to miss this.


Posted by Gretchen Seefried at 8:38 AM