No Wonder Southern California is Crowded... 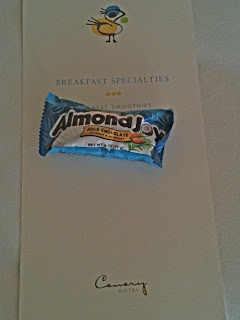 Can almond joy be considered a breakfast food?  Because that was all  I could find to coat my stomach before my fancy one-cup-brewed-at-a-time hotel room coffee infusion. We were at the Canary hotel in Santa Barbara.  When Pill (that’s how my friend Theresa used to refer to hubby Phil when we were in college, and he was being one.  Since so many famous bloggers have clever pseudonyms for their significant others, e.g. The Farmer, I decided that I should too) gave me a list of Santa Barbara hotels to check out, I had to pick the one with the bird name.
It’s a boutique hotel right off the main drag –State Street.  The old world tile treatments, four-poster canopy beds, and eclectic furnishings coupled with the whimsical canaries scattered around give it a unique Europe meets California feel.  The room has those touches that really remind you you’re on vacation.  Crisp white sheets, with lots of cushy pillows and a soft luxurious throw that I crawled under for a brief siesta when we arrived yesterday after saying good-bye to Kev, our newest college freshman. 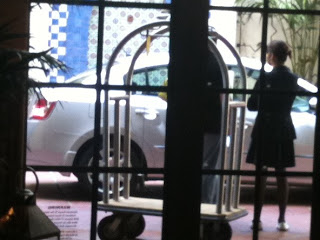 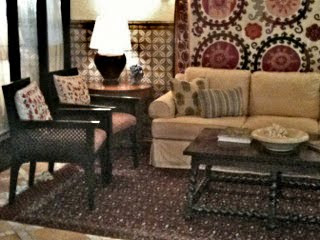 I do get irked however when fancy hotels nickel and dime-I mean ten and twenty you.  There were similar complaints about the Hilton in Chicago in June.  It seems like when you make the decision to go high end and pay a hefty rate for a room, that certain things should be included.  Whether it’s parking, or Wi-Fi, or the bottled water on the dresser, I’d rather have those fees hidden in the price of the room.  What you don’t know won’t aggravate you.
But enough complaining.  I've never been to Santa Barbara; in fact I have only been to Southern California twice…once when I was eleven and my brother and I spotted Florence Henderson in the dining room of the Beverly Hill Hotel while our parents were "sleeping in", and four years ago when my youngest was inducted into the Princess Cult as their personal messenger, preventing the rest of us from experiencing the most popular rides at Disneyland.
Kev’s school is in Claremont, a gorgeous town conveniently located 15 minutes from the small and crowd-less Ontario airport.  We  arrived Wednesday afternoon, as he returned from a camping trip at Mammoth Lake designed for freshman bonding.  Filthy, tired, and hungry, Kev was the happiest I’ve seen him since the Yankees won the World Series.
Minimalist that he is, the shopping excursion to outfit his dorm room cost about a quarter of what it cost to outfit his older brother’s and sister’s dorms.  His roommate could not be more perfect...a friendly baseball player from the Los Angeles area, with similar tastes in music and sports, PLUS parents that we liked from the get-go.  Everything about this college feels right.  In fact, the Pill’s ecstasy over Kev’s choice, was interlaced with brief flashes of insane jealousy as he stared longingly at the perfectly manicured fields, the signs announcing upcoming parties, and the slew of cute co-eds, moving in down the hall the dor. 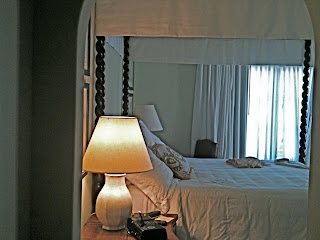 The goodbye was less emotional than most.  First, I had already had the meaningful hug and goodbye last Saturday.  And since Kev went to boarding school, I’m used to him being away.  Plus you could tell he was happy.  So after the President’s welcome, we gave our boy a squeeze and headed up the coast to Santa Barbara for a two day reprieve before heading to NYC for 36 hours to see his brother perform at Radio City...and then back to Denver for three consecutive command performance evenings at the younger kids’ school.  Phew..no wonder it's taken me 3 days to get this posted!

Current setting is a little more pedestrian, The Clarion Airport Hotel at La Guardia Airport! But whaddayaknow...free wi-fi.  Can you tell what my priorities are? Found this room via a travel site plugged in Women's Health Magazine.  Worth a look for you other last minute planners...

Posted by Gretchen Seefried at 8:58 PM