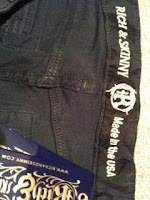 A couple of weeks ago, I took my 16 year-old daughter on a rare shopping spree. It was Nordstrom's Half-Yearly Sale, and I am a big fan of Nordstrom. The first time I ever stepped foot into one was in White Plains, New York over fifteen years ago. A new mall, The Westchester, had recently opened and was not only head and shoulders above the old Galleria Mall, in terms of cleanliness, decor, parking, and shops - but also had Nordstrom as its flagship.

It only took one visit to the children's shoe department for me to be hooked. It didn't take long to discover the women's shoe department as well, and that was a dangerous thing...
So when Nordstrom opened in Cherry Creek a few years ago, less than half a mile from my front door, I knew this could be trouble. And, in fact, I resisted setting foot in there for over a year. But one day, my shoe fetish got the best of me, and that was the end of that!
Last year, my friend Judi, a fellow chick on MidChix, introduced me to their personal shopping service, and the best personal shopper ever, Reinelle Apodaca. This was the icing on the cake. So when 16 year-old Nicki needed some new duds, and a new attitude about getting dressed and feeling good, I headed over to Nordstrom and Reinelle. All in all, the day was a great success.
Mornings suddenly weren't so bad, as Nic could find things in her closet that fit and felt good! Never doubt the importance of feeling good about how you look (especially when you're sixteen)!
So it was with dismay, while picking up laundry a week or so later, I spotted a crumpled pair of jeans on the bathroom floor with the tags still attached. Picking them up, I glanced at the price tag and was shocked to see these not only had not been part of the half-yearly sale, but had also been more expensive than any pair of jeans I've ever owned. Realizing that the fact they were crumpled on the floor indicated that Nicki had tried them and decided they didn't look right (or as she prefers to say) that she couldn't 'work' them, with relief, I smoothed them out and folded them to return. That's when I saw the label.
Rich & Skinny
Oh man. Made in the USA. But, of course. What other country would have the audacity to name their company Rich and Skinny. How about Poor & Skinny? Or, a more authentic logo for American-made jeans, marketed to Americans might be Rich & Obese.
I'm glad she didn't like them. Not just because I'll get $150 credit back on my card, but because God forbid I ever support a company that makes its cash by covering ass with such a reprehensible logo.
I still love Nordstom, and Reinelle. But Rich & Skinny can go to hell.
Posted by Gretchen Seefried at 7:34 AM