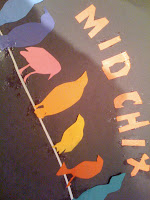 In two weeks, MidChix will migrate to a new and improved site and raison d'être as a social networking community for women who are curious and concerned about social responsibility.

Fourteen months ago, we launched as a boutique social-networking site for women over 40, with the knowledge that mid-life women have a firm grip on more than 85% of the consumer marketplace. During our evolution, we've come to realize that beyond just purchasing power, we make a significant philanthropic impact too. Reminding the 'powers-that-be' that politics is about people, women are making strides in the political arena as well.
A first wave of feminism, the 70-year battle for women's suffrage (1850-1920), was followed in the mid-1960s by a second wave precipitated by publication of Betty Friedan's The Feminine Mystique and President Kennedy's 1963 Report on the Status of Women, which documented women's economic inequalities. The growing recognition of a third wave taking shape, as described by Jean Shinoda Bolen, M.D. in her 2005 visionary call-to-action Urgent Message from Mother: Gather the Women, Save the World, is evidenced by the growing knowledge that women and girls aren't the problem, they're the solution.
Up 'til now, we've devoted an area of the site to featuring and fundraising for nonprofit organizations; now MidChix is re-launching as a niche social networking site specifically geared towards women curious about social change. We hope to educate and empower women by raising awareness about alternatives for allocating our individual resources, and the ability to affect change through activism.
The Mid in MidChix refers to Middle. In the middle of our lives, we have arrived at a place with a view very much like that from the center span of a bridge. We can see things from a unique perspective that makes us a little different from those gals closer to one end of the bridge or the other. We also serve as middle(wo)men in myriad relationships: between father and child, young and old, doctor and patient, teacher and student, conservative and liberal, gregarious and shy, rich and poor, producer and consumer...all often depend on our painstakingly-acquired skills of communication, cooperation, and collaboration.
Chix is our way of saying "hey, in case there's any doubt, we're cool". Plus, birds are pretty perfect representatives of women. With 10,000 living species, they have unique characteristics and universal charm ;)...
New and Improved. That's Me. And You. Okay, Us. After 40 years (give-or-take) becoming who we are, it's a rare bird who can't be called new and improved!
So MidChix, we welcome you. Please visit our wire, add your voice to our song, and celebrate because together we just may change the world!
(You can start today by reading about National Call-in Day -Wednesday November 17th)
Posted by Gretchen Seefried at 8:51 AM