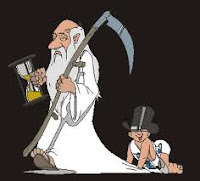 I was so relieved a couple of years ago when they added a few weeks to Daylight Savings Time...even though most of my kids had passed out of the trick or treating stage, I'm still happy to keep daylight as late as possible. It's easy to understand why alcohol plays a big role in places where it's dark for much of the day! Just sayin'...
Time is a chameleon. When the kids were little, "the days are long, the years are short" summed up the excruciating pain and pleasure of parenting. Similarly, weeks can seem to vanish (unless you forgot to put out the recycling). Thus I love reminders that things actually happened, especially when I feel like I'm running in place. It's one of the reasons I keep writing the mass Christmas letter I said I'd never write but started writing back in '94 when four kids under six made individual cards a pipe dream.

Although it's now over a year old, one of my favorite demos of how much the world has changed is this incredible little video about the social media revolution .

Gina Shrek sums it up perfectly: "To people who say they don't do technology, I tell them that's like saying you don't do electricity." I say "If you can't beat em, join em!" MidChix will soon give all members the ability to have a blog hosted on the site! Ladies, stay tuned...
Posted by Gretchen Seefried at 8:37 PM