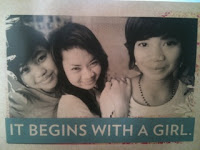 Last night I attended an incredibly moving event. James Pond, founder of Transitions Global was fulfilling a promise he had made to two girls, survivors of human trafficking, to give them the opportunity to tell their stories. Neth and Liya were in their early teens when they became victims of sex trafficking in Cambodia. Neth was sold to a brothel by her mother for $300. Liya was tricked into going to one by girls who were already victims and who were now being forced to recruit other girls.
The story of this horror doesn't come to an end when girls are rescued. There is so much to recover from, it seems nigh impossible that they could ever emerge whole. In fact the success rate for most aftercare programs for victims of sex trafficking hovers around 20%. This is not only because the girls don't learn skills that enable them to support themselves, but because they never have hope for a future of their own choosing. So, inevitably, most of them must return to prostitution in order to survive.
Transitions Global shifts the paradigm; in their words they deal "in the business of dream restoration". After establishing this center, James determined that he must do the same thing for the girls who came to Transitions Global, that he would do for his own daughters. He encourages them to dream, and then helps them achieve those dreams. Based on the belief that every girl is unique, and, working girl by girl (rather than in large numbers), TG's model is seeing unprecedented success in graduating strong, empowered, capable young women, many of whom are now working to help others who are emerging from the nightmare of trafficking.
Neth and Liya are two shining testaments to TG's work. Shy, giggly, sweet teenagers, they enjoy friends, shopping, books, and even boyfriends. They've also both completed over 800 hours of yoga instruction, and currently teach yoga to trafficking survivors and young children. These young women, once labeled throw-aways, have lives and futures. They are remarkable.
At the end of the evening Brad Riley spoke. President and Founder of iEmpathize, Brad has been a nonprofit innovator and leader for 20 years. It was easy to see why. He defined for us the difference between sympathy and empathy. The first is passive, the latter active. Which sounds better to you?
What about radical and reasonable? Ahh, here's the catch. It doesn't have to be radical versus reasonable, it can be radical + reasonable.
Radical describes the actions of the Pond family in 2005, selling their house, cars, furnishings, and moving their family to Cambodia to help young victims of human trafficking.

Reasonable, is the request that each of us become involved in some small way...organize a shoe drive, write an article, make a speech, send a check, volunteer with local groups fighting human trafficking, the list goes on...

What suddenly strikes me is how the efforts of these two men converge. One encouraging girls to find their unique gifts, the other urging us to support the first by using our unique gifts. By combining the radical commitments of rare people like the Ponds' with a multitude of reasonable contributions of people like us, it is possible to harness enough people power to actually make and sustain change.

Posted by Gretchen Seefried at 11:01 AM