My sixteen year old just killed a "gigantic" spider in her bathroom.  AND she said it was the second one this week.  I wonder if she starts counting the week on Sunday.  Otherwise it means she killed two today.  Or that she exaggerates. But either way, my skin has been crawling for the past hour.  I know there may be some of you who are those creepy-crawly loving nature types.  But as Camp Experience t-shirts say " I love nature, as long as it doesn't get on me".

When I was a kid, if I saw a spider in my room, and my Dad was asleep, I would go sleep in the bathtub.  No wonder I have chronic back pain.  We lived in an old house, and there were plenty of those little brown guys. I didn't find out until years later that my Dad was terrified of spiders too! Now that's what I call a good father.

When we moved to Denver, the finished basement of our first home (dubbed The Nightmare on Elm Street) was a big draw for my husband.  He had grown up with one, and so the idea of a home theater, pool table, plus bedrooms for the boys was just what he pictured as Home Sweet Home.  It was just what I pictured as Home Spiders' Home.  I'm sure my two oldest sons are scarred from me suddenly giving up the tucking in routine, after I realized that spiders like basements, finished or not!

While I loved the early Halloween years, when we would get super-creative and caught up in the hoopla, I dreaded the appearance of those reality-show worthy black plastic spiders that would topple out of goody bags from school parties and give me daily heart attacks throughout the week.

When this same 16 year old was eight, her third grade class took a field trip to The Butterfly Pavilion.  Sure, it sounds wonderful.  Who doesn't love butterflies?  When I volunteered to chaperone the trip, little did I know that the kids are encouraged to try holding Rosie. I blanch to think that I once considered naming that eight year-old, Rosie.  In case you haven't guessed, Rosie is the name of the resident tarantula at the Butterfly Pavilion. If this link doesn't make your skin crawl, then we're not friends anymore.

So Terminex is coming in the morning.  Terminex and I have had a  long and complicated relationship.  The first time I called them, we lived in Westchester NY, and I had just spent 6 hours frozen on my bed after spotting a rat meandering across the kitchen floor when I made the 2 AM journey to the fridge for that same child's bottle. Are you sensing the same theme that I am?  Did you notice that all of these encounters were prefaced by something with Nicki ??? Hmmm. 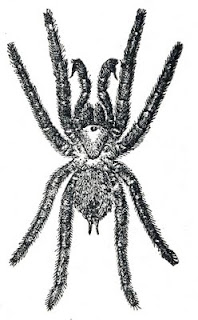 Posted by Gretchen Seefried at 9:19 PM