My name is Gretchen and I'm a Coffeeholic.

This morning I rolled over and admitted that without coffee, there was no reason to get up.  This is a sad state of affairs, I know.  But I'm sadder that I can't have coffee than I am about being a coffeeholic. 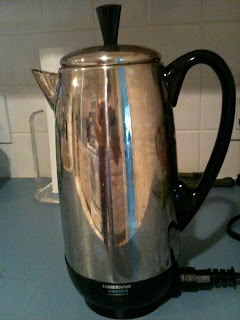 I often put off scheduling those medical tests that require you to fast. Even though I eat very little in the morning, it's just the idea of not being able to, that makes me want to puke (or stab the doctor with a fork when he's 45 minutes late for the appointment, and I've been starving since midnight).  But this time, not only no food, but no caffeine as well, AND the test isn't until 4:00 PM.  Now that's not right.  And the scheduler took exactly zero pity on me when I began to howl like my dog when he's left alone.

Several months ago, I wrote a smug post about my ability to jump out of bed in the morning.  I take it back.
Posted by Gretchen Seefried at 8:20 AM