I'd never seen a money order before; wasn't even sure what it meant...until 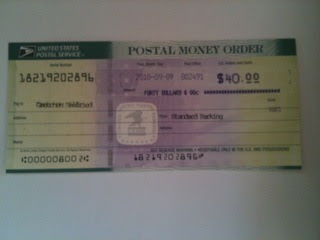 yesterday afternoon, when one arrived in the mail, along with a thoughtfully written letter of apology and explanation from Herald Hensley, the Airport Parking Manager at Denver International Airport!

Hensley's two-page letter referred to my earlier blogpost , that had ripped both Standard Parking and DIA, as well as the NYPD, and our friends at TSA. This response was not the only surprise I received after my loyal MidChix team tweeted my foaming at the mouth for all the world to witness.  I also received a response right in the comment section of my post from Justin Brunner, Corporate Communications at Standard Parking promising to follow up with the folks on the scene...which he evidently did!

I want to give both Standard Parking and DIA's Parking Department a round of applause. Not only did they acknowledge my complaint, but instead of going on the defensive (a natural reaction) they addressed and resolved it.  Their willingness to forego $54 bucks and mollify an irate customer is even more impressive given that I'm a captive customer...it's not like I can just protest by never again parking at Denver Airport!

The good will engendered by such an unusual and admirable act may be hard to put a value on, but I'm convinced that good deeds are contagious and imbued with karma. Hats off to these folks who actually read about my experience, and responded as principled human beings as opposed to administrative automatons.

Brunner's comment on my post also speaks to Standard Parking's social media savvy. I'm guessing it's because they're tuned in to Twitter that the honchos there heard about my blog rage in the first place. Whether businesses like it or not, social media tools like Twitter are going to hold more and more of them accountable...too bad these tools weren't as powerful a few years ago when an obscene number of banks, and other lenders were having their way with our economy.

Having just finished reading Bob Garfield's The Chaos Scenario, on the flight prior to my parking fiasco, I was inspired by the result of his Comcast Must Die blog and the website that evolved as a result of his rant.  In fact, I was so inspired, I bought the domain name HumaneTreatmentforTravelers.com shortly after posting my previous blog.  Stay tuned for this coming site where victims of travel hell can share their stories, and maybe even find avenues for recourse.

Terrorists have complicated world travel, but technology is ensuring word travel...and that may just take us further anyway.
Posted by Gretchen Seefried at 5:48 PM