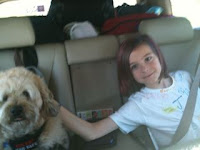 When making hotel reservations for the inaugural night, be sure the clerk who you will need to call after taking a wrong turn, doesn’t claim Tongues as his primary language.

Marriott VS. Hilton? Marriott- half the price/ queen beds instead of double/ free wi-fi/ free breakfast/ unlocked room fridge. The Hilton failed to mention that although they are pet-friendly, if you have a pet, you have to ride in the service elevator. But yes, the help was friendly to our dog.

Days Inn is called that because you should only stay there in the daytime.

It is always raining on the Pennsylvania Turnpike. (Mind you, I grew up there).
Weather really does affect your mood. Ask my children. (And maybe my mother).

Don’t plan a cross-country trip during a year when the Federal Government has ordered construction on every interstate road as part of a massive training program teaching men wearing orange how to hold SLOW signs. 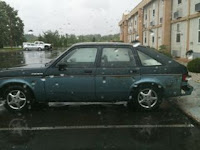 Chevy Chevettes are not extinct.

There should be a Taser junior available over-the-counter to use on leering men in tattoos and wife-beaters that frequent the aforementioned Days Inns.

Triple AAA TRIP- TIK is great except that the implied “this won’t take long” drive times are comparable to the labor nurse’s “this won’t hurt” as she shoves the epidural needle in between your vertebrae.

Contents of our imaginary suitcase packed for our imaginary trip to Japan, as we imagined that we were passing the time in Iowa: apples, baloney, curlers, dead stuff, egg rolls, Francine from Arthur, guts, handy-dandy notebook, illegal drugs, Jewish rye, Kevin, lame mutt, mahogany buttocks statues, nutella, Orion, poop in a pot, questionable cheese, relish, seashells, tranquilizers, underwear, vodka, wet ones... Just before Y is when I began shrieking at the man from the Comfort Inn who kept insisting on giving directions in Tongues.

The cheapest motels sport bathroom fans strong enough to clean the attached room with a simple flick of the light switch, but blow dryers so weak, you have to stay an extra day if you want dry hair when you leave.
`
Fancy hotels don’t bother with a bathroom fan. Obviously the wealthy don’t need background noise to do their business; stage fright is not a problem when you have enough jack to go 5 -Star.

The moderate hotel is the best of both worlds… not only a light switch and separate fan switch (so you don’t HAVE to listen to the fan unless you are experiencing stage fright). And a much-appreciated curved shower curtain rod ensuring that washing away the day’s grime does not also include wearing the previous guests’ grime.

We believe that children (and dogs) should learn swear words in their own home. They are much less likely to be traumatized when hearing mom use the F-word while behind the wheel.

I take pride in the fact that my 10-year announced (while eating yet another burger at another rest stop) that there’s only ONE swear word that he doesn’t know the meaning to. I cringe when recalling that I then actually asked him what it was. “Ho” he says. Well, last year he had come home from school and told his dad he’d learned a new bad word but didn’t know what it meant and didn’t want to say it. After my hubby suggested he spell it… it was tough to keep a straight face when he whispered H-O-R.
I guess his Dad must have explained it in a "fatherly" kind of way, because when I told Cam that Ho was slang for “H-O-R”, and asked if he understood what that meant now…he winked and replied “oh yeah, when someone is havin’ a “little too much fun” for pay !

Posted by Gretchen Seefried at 2:09 PM