Not a Phone Person 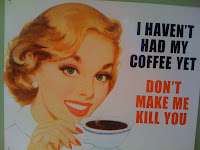 Why, oh why, do I dread the ring of the phone? Or, maybe the better question is, why do people keep calling me? I, now understand my parents' ire when my brother and I were teens and the phone would ring incessantly. It was such an intrusion to them, such a possibility for us.
I guess I should be thankful that the era of cell phones, and texting mean that my irritation over a ringing phone is primarily directed at my own.
If only I could emulate my friend, Laura, whose phone manner I greatly envy. Every time she answers, there is that thrill and trill in her "Hello?" that makes the caller feel like the most important person in the world. What a gift. My pal Sarah has the right idea, she just doesn't answer. She calls when it works for her.
I do remember earlier years when I would rely heavily, way too heavily, on the phone to connect me with someone, anyone, who would empathize with me about whatever situation had triggered my self-pity. It took a long while for me to realize that if you're having a bad day, calling someone for empathy could seriously backfire-making your bad day even worse. I guess this was when I began discovering that sometimes solitude tops empathy.
I love my family all the way down to my toes and back again; and my friends as well...but I have discovered in this magical middle age, that really, at the end of the day, all you have is yourself. Nobody else is going to make you feel better. Sure the warmth of love and friendship help buoy us all...and relationships ARE the icing in life-but we, as individuals, are still the cake and if we always rely on someone else to cheer, distract, entertain, validate, and fill the empty airwaves for us...then we are in for disappointment.
Enough philosophy. Chances are my dread of the phone is leftover from when the kids were small and a phone conversation was an exercise in futility and frustration. Or maybe it's because I stumble over words unless I'm writing them. What if we could edit our phone conversations before they actually aired? Or perhaps it's PTSD from being forced as a boy-crazy teenager to have every phone conversation in front of anyone and everyone in our little shore house when cordless phones, much less cells, weren't even a glimmer in some geek's eye.
With that said, I hope to make amends for barking at both my husband and daughter this evening, when they were thoughtful enough to give me a call. Kris suggested (strongly) that I go take that little white pill which I had toyed with giving up after a brief externally-imposed hiatus waiting for the doctor and pharmacy to make nice. I decided to take her suggestion.
Who knows, maybe if you call me in a day or so, I'll sound like an eager potential lottery winner when I say "hello?"...or maybe I just won't answer.
Posted by Gretchen Seefried at 6:39 PM