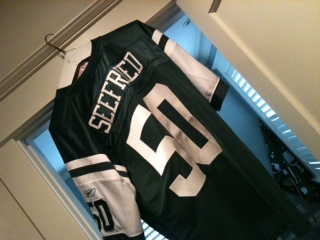 Yesterday my husband was pacing around the house in his personalized SEEFRIED New York Jets jersey. " I can't decide where to watch the game"...he shared; "either here, or at a bar or at Ron's..." he pondered out loud. I asked what he was basing his decision on, figuring it was either access to game food (our house is in strict diet mode this month), a bigger and better flat screen, or the company of fellow fans.  But he looked at me incredulously, and replied "well, it's all about the luck!".

This made me guffaw out loud.  You see, Phil is the kind of guy who smiles to himself and slightly shakes his head when he hears me talk about birth signs, past lives, karma, or The Secret.  But here he was, completely convinced that his being in the right place at game time would ensure that the Jets players would all be in the right place at scoring time!

It was a sad camper who trudged through the door a few hours later.  But I have to give him credit.  Though he was bereft, he rallied and joined the rest of us on a last minute bowling excursion to commemorate our son's final night before leaving for a semester in Florence.

When we arrived at the bowling alley, we found out where everyone in Denver goes on Sunday nights in the winter!  Though Phil was hoping for two lanes together, it was too crowded. So he headed off to buy himself a condolence beer, while the gal behind the counter handed us our shoes and apologized. I replied "no worries, he's just depressed because the Jets lost, and he's in mourning".

Suddenly after assigning us to alley 21 (which already had a large group huddled around it's connecting alley 22), she moved us to a new location with two connecting alleys all to ourselves!  Before leaving us to admire each other shoes, she gently inquired if we were schooled in bowler courtesy. (Emily Post, here's new territory for you...)

Anyway she whispered that the people next to us were League Bowlers and that they were pretty picky about bowling etiquette.  So...we should be sure not to set foot up on the alley if someone in their alley was preparing to bowl.  Hmmm.  Seemed easy enough.  Then she put her hand on my shoulder, leaned in and said " I know that's the least of your worries today, but I just don't want them to cause any trouble for you at a time like this."

I was a little surprised by her pure empathy with Phil.  I mean, it IS too bad about the Jets, but I thought Phil and Rex Ryan were the only ones who actually thought it was the end of the world. But I thought to myself, "ah,  another sentimental New Yorker"...

Then her eyes welled up a little, and she continued, "I lost my own parents last year, and I know how hard it is..." and then I realized that this poor woman thought Phil was mourning a person!  The sound of pins being toppled must have muffled my reference to the Jets, and she had just heard "lost" and "mourning" We were getting the death in the family treatment under unintentionally false pretenses!

Well, I felt kind of bad, but not bad enough to clear up the confusion, or give up our new lanes!  So we went ahead with our game...and when she showed up again twenty minutes later, we all tried to look slightly dejected which was easier for the gutter ball throwers, and the Jets fan than for those of us rolling our best game ever.  Apparently the League bowlers had noticed our eleven year-old nearing the lane return machine when one of their players was preparing to bowl. Now this seemed kind of silly to all of us.  I mean, almost as silly as someone mourning over a football game...but seems that Lady Luck really had been smiling down on Phil, because after giving him a convenient scapegoat for his bad mood... he ended up bowling close to 200!  That showed those guys.  And we're thinking we may just start our own darn league...bowling anyone?
Posted by Gretchen Seefried at 1:26 PM