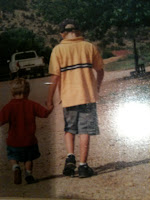 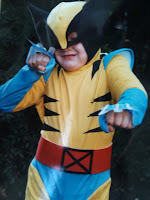 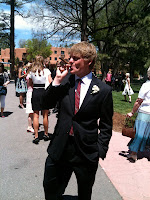 My middle kiddo graduated on Friday. Must have been just last week that I took this photo of him when he was a super hero of some sort. He really is a super hero in my eyes despite the fact that he calls me Ma as if we were The Beverly Hillbillies. This is the same kid who refused my friendship on Facebook, and then took all the credit when I created MidChix.
He is one of those quietly caring people whose primary goal seems to be hiding those tender feelings from prying eyes-especially his family's. But I have had little glimpses of the real him. Fiercely loyal, painfully honest, fanatically informed. With a brain that computes quicker than his T3 calculator, he can intimidate with his command of numbers and concepts. But that same brain can empathize with the frustration of a three year old whose brain works in a unique and mysterious way. http://www.midchix.com/pg/pages/view/6012/
I am blessed to have him in my life...even if he would never let me say that to his face. So I'll whisper it here-don't tell though.
Speaking of family and friends.......
Please join
The Midchix Family
MidChix Friending Contest
Beginning June 1st, the chick who has the most friends register and fill out their profile (this is how they let us know they heard about MidChix from you) and the chick with the most total friends as of September 1st 2010
each
wins
a
$250 Visa gift card!
Go HERE
and join the fun at
MIDCHIX
I'm Linking
up
to